A letter, received in the post on a Sunday

I am at peace. You don’t have to worry about me anymore, because I am doing what needs to be done.

I did what I had to do, to help you get the peace you never had while we were together. All of this, just to say “I love you” in a way I couldn’t before.

Don’t think bad of me for what I’m doing. I don’t care about myself. Never did. I only want you to be happy.

It’ll all be over in a minute.

My love and goodbye to you.

Gina sat on the hood of the car, looking up into the sky. She reached her arm out and tried to touch the stars.

“What are you thinking, Gina?” her cousin Brian asked, arm and leg hanging off the side of the car.

“I’m thinking about quitting my job, finding a place with no light, and counting stars forever.”

Brian turned his head and smiled.

“Has life been that bad for you?”

“Nah, I just am tired of civilization.”

Brian looked up at the stars, and smiled.

“I’d have to come back to people…”

Alright, here we are!

First, before we begin, I just want to thank all of the people who have been reading the Friday Fictioneers works that I’ve been putting out for nearly the last year. With the world becoming busy, my time for creating actual short fiction stories had reduced to a trickle. The last part of 2015 was one of the toughest times in my life, because I was in a foreign country without much hope of finding a job while going to university. I had to give up on that part of my dream, and I moved back to Korea, but I still had to deal with a lot of pain. The first 6 months of 2016 were hard on me, and writing became a bit of a chore.

But things started breaking during the summer.

Off-blog, I am currently working on a 6-10 thousand word story for publication. The inspiration for it is key, but I have been having motivational issues. The good thing is that right now, it’s the perfect time for me to get working on it. And so, I am about 2500 words in. Also, I have finished the outline of a movie script that I plan to get to after this story is completed. So, off-blog, there’s a lot of stuff going on.

On blog, there will be a few things that I am going to be doing:

First, I will be doing a redesign of the blog to add an element of awesomeness to it. I am planning to work with a friend of mine to create a website that will be more aesthetically pleasing to myself and more reverent of the craft that I am working on mastering. Plus, green and a picture of Crater Lake has been the logo for a long time. I’m going to try something different.

Second, I will be starting to utilize my other blog, the blog with my name on it, as the platform for my more Christian-oriented writing, as well as music reviews. This is not because I don’t think that the writing I do doesn’t deserve to be on Music and Fiction, but because I want to make the Warrior Series more compact and in a place where people who may not wish to read Friday Fictioneers can read it.

Third, I am going to be spending more time on responding to comments. Now, this sounds a lot like something a blogger should be doing everyday. That’s true. The problem I’ve had is that in my lethargy, I haven’t been putting time aside to do so. In fact, this is part of a reason for a semi-overhaul of my blog: To allow me to give and receive feedback in greater numbers. People deserve it, and I need to do better.

Last, I am going to be working on an idea to re-write some of my older stories and update them. Make them longer, expand the storylines, add more musical content, and really focus on getting things back to life.

Now you’re probably wondering: What’s the reason for all of this? It’s simple: I spend too much time just surfing the web and not being creative. It was the words of my pastor, Marcus Corpening at New Philadelphia Church in the Itaewon area of Seoul, that helped redirect my thoughts. If you’re going to be the master of something, you need to spend more time with it and develop it to its logical end. That takes years. Many years. I’ve been doing this since 2013. I’ve logged in over 200 entries (with a good number of them being fictioneers posts), and I think it’s time to take things up a notch.

So, keep watching this space for more updates on the blog. And thanks for sticking with me.

(Author’s note: I will be doing some updates on this Chuseok weekend. I will also post a big personal non-story update, to give people an idea of what’s to come with Music and Fiction. In the meantime, here’s today’s fiction!)

Devon plopped the lump of clay on the wheel.

She cut and removed pieces she didn’t need, like pieces of her life that were unusable. She slowly formed the rounded lump with her hands. Pushing and pulling the clay, smoothing it out with water, she slowly developed it into a shapely, beautiful vase.

The final product stood in the entryway, a tribute to her dearly lost husband, who was now a part of the beautiful vase. 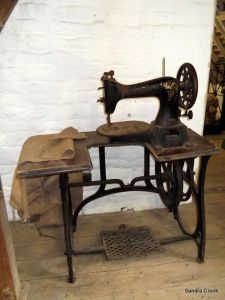 Janeane Crawford ran through the fabric store, with five minutes until closing.

She quickly grabbed a random bolt of cloth, and ran to the counter. The checker ran all the purchases through except for the final random bolt.

“Are you sure you want this?”

She rang it through. Suddenly, from the corners of the store, a loud noise rang forth. It was like the sound of 1000 sewing machines revving up.

“You got gabardine. And now you must pay for it…”

Janeane cried, as the checker laughed maniacally, showing her the total.