(Writer’s notes: Most of you have seen that my output has been low lately. I’ll make it easy and simple: My work is mentally exhausting. I generally like to write, but when I get home from tough days of figuring out problems, I sometimes don’t have the capability to write. I am working on it for 2020, however, and hope to have more. I definitely have ideas. Here’s today’s fictioneers…) 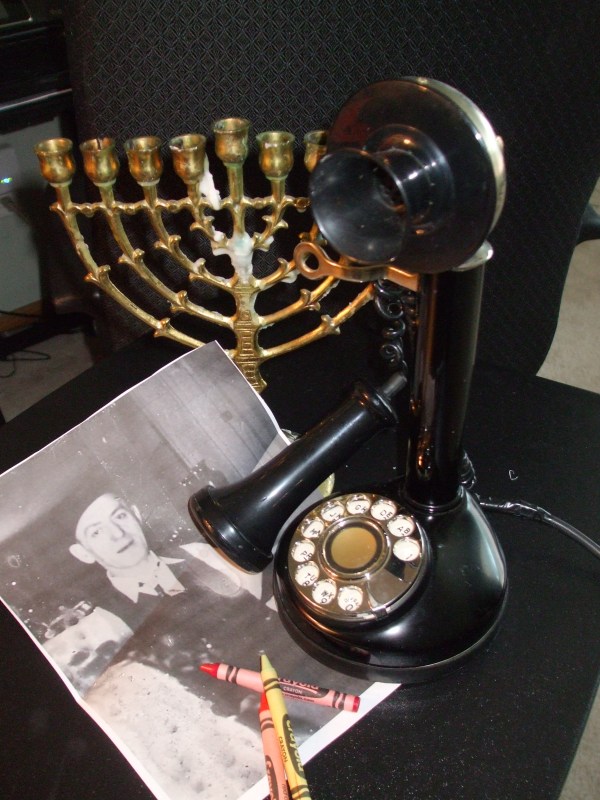 I Am I Said

Eschel looked down at the foyer table. Yarmulke on one side, phone on other.

He wanted to go to synagogue tonight, but the attacks on his brethren nearby in Westchester were still playing through his mind.

His wife, Lillia, pleaded with him to call an Uber, or a taxi, to take him there. She didn’t want to see him jumped like the ones in Brooklyn last week.

He bowed for a second, before putting on the yarmulke.

He wrapped his long coat around him, and went out the door.

(In memory of those who lost their lives while enjoying Hanukkah celebrations with their rabbi in New York.)

The Moon Over Georgia
by Miles H. Rost

The voice was husky, tough yet soft.

“You have a choice, Melinda.”

The werewolf turned around and stared at his daughter, a blonde-furred beauty.

“Your inheritance will be released to you early, if you marry Martin.”

He gestured to a black-furred werewolf from a tribe in Idaho.

“Or marry Gerald, whom you claim to love; and renounce everything, yet be free of the curse.”

He gestured to a plain-looking, bespectacled man of around 30.

Melinda looked, then latched onto Gerald and jumped off the yacht.

Melinda bobbed up after a moment; her fur and muzzle both gone.

She would marry Gerald, instead.

(Warning: Strong Language.) (This is the inspiration, in a way.)

(aka Sherry and Scott: Part 2)

Sherry Makinami and Scott Schmidt looked out at the plants that grew outside of the Hamilton Dormitory Complex, while they each sipped on a cold drink. In the aftermath of the events from earlier that day, word had spread to parts that two girls had it out with each other, but without a punch thrown. While no one really knew what happened, Sherry knew. And she was still shedding tears.

Scott looked down at her, his arm wrapped around her shoulders. He leaned her head against the crook in his shoulder as he sipped on his soda.

“Think you can tell me now what happened?”

Sherry looked down at his hand, sighing.

“And yet, to make sure I know what I’m getting into, I need to know.”

She sat up and looked him square in the eye. She took a breath in, readying herself for the story that she was about to tell.

“It started in high school. I was being picked on for many reasons, most of which were incredibly childish and petty. One day, it went too far. And I just got mad at this one girl. I just kept thinking about how she just needed to go away, to just shut up and leave me alone. I didn’t realize it until after her body hit the floor that I caused her to die. They called it a stroke, but I know that it was me who did it. With my mind.”

Scott looked into her eyes, piercing the veil and seeing the true feelings in her mind.

“And this thing you have, it only happens…when you’re stressed?”

“Not really. It’s more either when there’s a lot of danger happening, like with Delia wanting to have her goons beat you up; or it’s when someone really makes me angry. I’ve learned to control it so that it doesn’t hurt people who I love when they disappoint or cause me anger, but the limiters come off when something I love is threatened.”

Scott continued to look into her eyes.

“So that means my brains won’t go splat if we have an argument, right?”

Sherry’s face turned to horror, before she closed her eyes and breathed.

Scott smiled, and laid her head back down on his shoulder.

“Even with knowing what you can do, I wouldn’t leave you.”

She snuggled into his shoulder and sighed contently.

“Oh, Sherry. Our love holds on. Even through scanner events and strange dealings.”

Sherry looked up at his face, as he stared out into the darkness.

“I should’ve been gone, long ago and far away. But, now I know just why you stay.”

He looked down at her again and smiled.

They spent the rest of the evening and late night looking out at the people, just holding each other and being content. As the evening wore on, they never noticed the peculiarly placed plumbing van on the other side of the street.

“Got eyes on the target, Vincent?”

“Yep. I think we’ll be able to get her this time. And this time, it won’t end up in fiction like ‘Firestarter’.”

The sound of Scott’s “meowing cat alarm clock ringtone” helped to rouse him from his sleep. He stretched his arms out, and looked at his bed. Noticing that no one was there, and breathing a sigh of relief, he sat up and went over to the window. He opened it and looked out on the sunny quad, overlooking Humpy Lumpy Lawn.

He noticed a pair of nice looking legs tanning in the mid-morning sun, reading a book. He looked at her and grinned, as he got himself dressed.

He walked out to the lawn in flip flops, a hawaiian shirt, and cargo shorts. He stopped just before, and took a look at the nice pair of legs, attached to a beautiful rest of a female form, and he plopped down next to her.

“You are the best sight to see in the morning,” he said to her.

Sherry looked up at him from her book and gave him a peck on the cheek.

“Very few people are talking about yesterday. I’m back to being largely anonymous.”

He brushed a strand of shoulder-length maroon hair out of her face. He admired her face for a few seconds.

“I don’t know how long that will be, though.”

Sherry looked up at him, puzzled.

“What if I became student union president and serenaded you in the middle of the amphitheatre?”

Immediately after the word “serenaded”, she started to blush a color that nearly matched her hair.

Scott looked at her and smiled. He finally found something that he could use for later.

“Seems that you know that there’s a fever that you’ll never find nowhere else. You can feel it burnin‘.”

Sherry closed her book and sat up onto her knees. She brought her face close to his, and looked deep into his eyes. He felt her pierce his soul, and he hers.

“Maybe you can serenade me over lunch at Rennie’s.”

He smiled, and lifted her up.

They left the lawn and headed towards the other side of campus. They walked across the street, and passed the van that was still sitting next to the curbside.

Scott was about to say something, when he felt his world go black. The last thing he heard was the muffled scream from Sherry, as he slipped into unconsciousness.