(Author’s note: You probably noticed that I was absent for the last couple weeks. One reason was because I turned 39, and celebrated my birthday in Los Angeles. I got to see sights, have a great time, and do a lot of different things. The other reason was because I was in the middle of a big move, and didn’t have internet at the new place until I was on vacation. So now that I’m back, let’s have some good fictioneers work.) 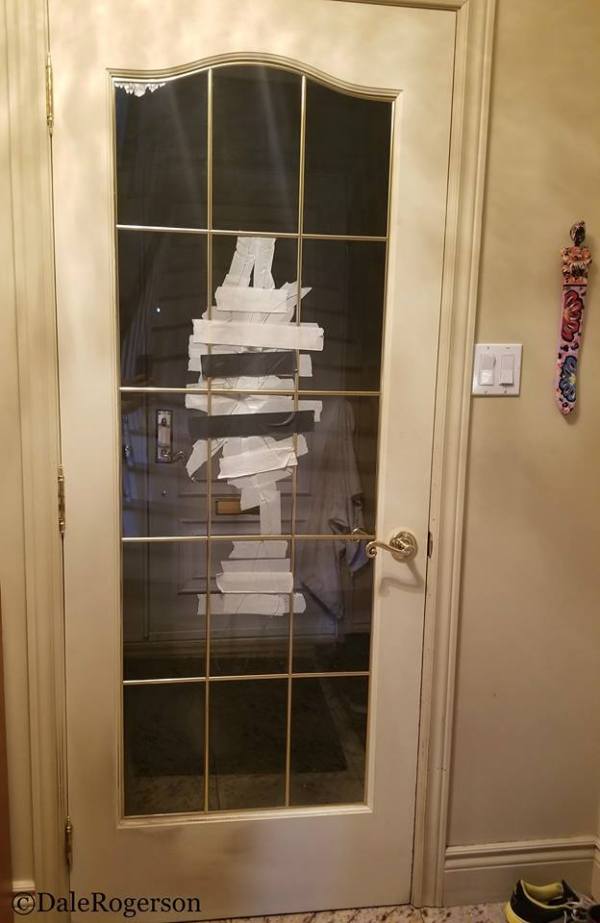 One cop car in Canyon Park was routine.

Seven meant someone wasn’t coming home to their family.

Three officers looked over and made sketches of the deceased, the massive hole that showed a liquefied heart and a half-torn stomach.

Two officers sat with a grandmother, uncontrollably sobbing, crying out “I’m sorry” in Korean. Nearby her, in another officer’s hands, a .223 rifle.

Three more officers are chatting with the medical examiner, who had taken one look at the body and motioned for the gurney.

Two officers stood by a police line, making sure reporters and their ilk didn’t get through. 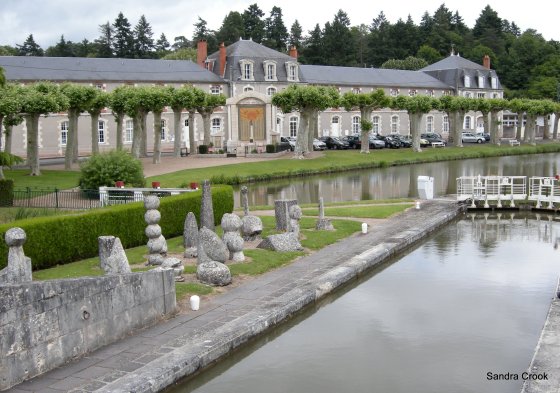 Tension as thick as whipped cream.

At the Ballarat Estate, the annual charity Chess and Pie Ball were underway, and the pie competition was fierce.

15 contestants, and the time was at hand for the final results.

The envelope opened. The bright face of the chairwoman turned glum.

“Angus MacDonald and his Scotch Pie…for the 12th year in a row.”

Angus laughed, and started to dance his jigue.

Angus looked back, and saw Constable Barklay with handcuffs.

“The jigue is up. You were caught stealing that pie.”

(Author’s note: Job hunting time is happening, which means that my current amount of blogging/storywriting will probably be what I get to. In Korea, if you’re an average teaching schlub, you have to renew your contract year after year. So, I am on the hunt for a new teaching job that gets me closer to Seoul. Otherwise, enjoy this piece that just popped into mind.)

I Will Get To You

“Do you remember the drill?”

Captain Paul Jacobson of the 27th Precinct grumbled at his makeshift partner, Captain Brock Kaplan of the NYPD Harbor Division.

“Get onto Government Island, get the girl, get out, no shots.”

“Do you remember what else you’re supposed to do?”

“Do you think this is my first rodeo, Kaplan?” Jacobson said, glaring hatefully.

Kaplan sighed as he gradually slowed the speedboat down. The plainclothes of the duo were covered in sea mist.

“This is my niece we’re talking about. And we’re not authorized.”

Jacobson looked down, shaking his head. Remembering his little Lisa, he steeled himself for the fight.

(Author’s note: I’ve been a bit busy with classes and other things, but I hope to get myself back to posting twice a week soon. Otherwise, here’s today’s Fictioneers.)

“Frankenstein just walked in, and suddenly I started getting hit in the face.”

“I did the only thing I could do, I reached for the jar, put my hand in, and started to throw. One right after another.”

“Did he do anything?”

“He started moving back, away from me, and that’s when it got lodged in his ear.”

The officers shook their heads, and walked over to the unconscious Frankenstein.

“We’re charging you with battery.”

(Author’s note: Things have been quite busy this week. Bad experiences abounded, but good things are to come. Week 6 of uni has almost come to a close, and there’s another 7-8 weeks left to go. But, some big stories will be done soon, as I will need time to just sit and write and detox from writing essays. You all may be recipients of the work. Anyhow, here’s today’s Friday Fictioneers, with a bit of Australian flair involved.)

“What’s the number on this one?” Senior Constable Alistair MacKaye asked.
“Looks like this is the fifth one,” his partner, Constable Jacklyn Brandt replied.
“And I’ve been called out here six times in the past month.”
“I don’t understand, is there something about this place?”

“Jackie, do you know anything about icehouses?”
“Nah. Never heard of them back in the bush.”
“It’s a nuthouse. They like the walls. Sometimes they climb them.”
“And then?”
“Some of them fall off.”
“Isn’t that a travesty?”
“Eh, I don’t mind the walls. They keep us safe.”

The van that carried Brad Pershing and his fellow bandmates screamed down the 101, heading for the western side of Santa Barbara. Mackie “attempted” to drive carefully, with Brad hoping to arrive at the Seawalk Grill along the channel on time and alive.  Blazing past the exit for Cabrillo Boulevard, the van started to accellerate to the point where it started to shake slightly. Brad, looking straight ahead and white knuckled, was incredibly worried at the sight of the lampposts moving quickly by, and looked over at the speedometer.

It registered a reading of 95 miles per hour.

“Mackie! Slow down!” he said, looking at Mackie with panic.

“Do you want to get there in time, or do you want to lose the money we’d be making?” Mackie retorted, with a wild laugh.

“I want to get there…” Brad started to say, before a pungent odor wafted into his nostrils. The overpowering smell of burnt sage, all too familiar to him in dealing with his pot-smoking sister, caused him to start coughing and gagging.

“My God, Mackie, how much weed did you smoke?”

Mackie laughed and groaned dazily as he drove, now starting to move across the white lines of the 6 lane highway.

Seth sat up and tapped Brad on the shoulder, giving him a stern look indicating displeasure at the questions. Brad made a sideways chopping motion, silently informing Seth to stay out of it.

“What’s the problem? I can drive!” Mackie laughed, as he turned the wheel from one side to another rapidly, making the vehicle weave.

Brad was about to say something more, until he noticed a red, then a blue flash. He looked in the side view mirror and saw a police cruiser with its lights fully on, close on their tail.

“Mackie, that’s the cops! Pull over!”

Mackie floored the accelerator and started speeding around slower moving cars. They were halfway through Santa Barbara, approaching State Street, when they noticed a second set of lights joining the pursuing cruiser. This had officially become a high speed chase. Brad sat to the side, making sure his seat belt was on tight.

“Oh God, it’s OJ Simpson all over again…” He moaned, as he looked straight ahead, his face already white as a ghost.

The police cruisers behind the van stayed back behind as drivers started moving to the side of the road. Within a few moments, a third cruiser moved from behind the first two and started to gain on the rapidly moving van, already clocking over 105 miles per hour. They quickly passed the State Street exit and headed straight towards the exit for the Santa Barbara airport.

“Our exit is coming up!” Mackie exclaimed, “No mercy for SWINE!”

He passed a big rig after passing the Turnpike Road interchange, and quickly moved over 2 lanes of traffic, causing 1 car to run into the ditch. He finally reached the right hand lane to take the exit. Just as he was about to go under the underpass, the right tire of the van hit a board in the road. The nail hit the sidewall of the tire, causing the tire to violently explode and cause the van to start skidding to the side.

The van tipped to the side and rolled over multiple times. Inside the van, screams of pain eminated as the members of the van started to be thrown in the vehicle. Their keyboardist was thrown out the window and crushed as the van rolled through the underpass.

Seth continued to be tossed around the van as it continued rolling past the embankment under the bridge and into a stand of trees. The van finally stopped as the driver’s side door slammed into a thick scrub tree with a sickening thud.

Seconds felt like hours as the van rested. Brad, still sitting in his seat and buckled up, had his eyes covered with his arms and his head in his lap. The sound of his breathing filled his ears as the sounds of the van quieted to silence. Brad pulled his head up and tried to move his right arm up to his neck. A sharp twinge of pain shot through his arm and he cried out. He tried to lift his left arm, and was able to rub his neck. He looked towards the driver’s seat, slowly.

His eyes filled with the vision of his lead singer, Mackie, with blood gushing down the right side of his head, and upside down. Brad was filled with horror at seeing his friend, dead, and he screamed. Muffled sounds coming from outside and the flashing of red and blue lights filled his vision as his door was opened and he was extricated from the vehicle by a member of the California Highway Patrol.

Brad, upon hearing words, started to sob openly. The vision of Mackie, one eye open and blood streaming down his face, continued to be all that he saw as he bawled into the shoulder of the officer.

“Sanchez!” the officer called to his partner, who was peering into the van with his flashlight, “Are there any others in there?”

Brad overheard this, and screamed out a scream of terror. His friends, his bandmates were dead. He was alive. His system shut down as he went limp.

Brad Pershing was the only survivor of a car accident that should not have had any.