Taking a little break from my stories today to mention that I was nominated by my good friend David Stewart, the denizen of The Green Walled Tower and a fellow fiction-man, to receive an… 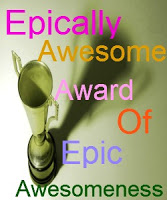 To those who have been reading, and have been unique visitors, I appreciate this. Ever since I started this blog early this month, I’ve been hoping to reach my work to an audience who actually is interested in seeing the connection between music and fiction. Music is a way to draw out the ideas for fiction, and fiction a way to give music a voice that it may not have ever imagined it being.

Now, one of the biggest things with this award is that not only do I have to write 10 things about myself on a piece of fruit, but I also must put links to 15 epically awesome blogs. So, without further adieu, I am going to pull the fruit truck around and start writing. *proceeds to run back around the one-room apartment building and drives up a lorry full of fruit.

1. I have left my home country twice (written on a small Jeju tangerine)
2. I once was a radio announcer (written on a purple banana)
3. I once wrote a play, and had it done, and it was really bad (written on a mangosteen)
4. I have been known to yell out nonsensical things in the most unfortunate of times (written on a durian)
5. I have been a believer in Christ for longer than I have not (written on a Starfruit)
6. I once ate two gallons of ice cream in one sitting. It didn’t sit well. (written on a juicy pear)
7. I am nearsighted. (written on an unripe alpine strawberry…with a very tiny laser)
8. I only recently got into listening to modern music, I have always been an 80s guy (written on a lemon)
9. I have turned the channel when a scene that I know is embarrassing comes on, to spare my embarrassment. (written on a bunch of blueberries)
10. I have big thighs and I cannot lie… (written on a ruby red grapefruit, then tossed at a random head in the crowd).

And as for the 15 blogs that are also epically awesome…alas, I can only point to three at this time because I haven’t been on blog long enough to actually make a difference with 15. So, here’s my three (not including Green Walled Tower, which is the pinnacle of awesome):

1. Perpetual Anticipation – http://perpetualanticipation.blogspot.com/ – This guy has a different way of thinking, and is very resourceful with what he does on his blog.

2. Adam Brickley – http://adambrickley.net/ – I used to be a politics guy, but this guy does things differently. He doesn’t just do political blogging, but he does a lot of analysis and what-ifs. He’s my go-to guy for anything that is related to politics.

3. Scarlet Rhapsody –  http://scarlet-rhapsody.com/ – A close friend from many years back, Scarlet does a lot of work with anime, cosplay, and whatnot. Very good blog to look at and watch.

So, there you have it! Time to put this in to the sidebar and then write the next story. And please, make sure to take time and comment!

All written works are © by Miles H. Rost 2013- in accordance with all relevant US copyright laws. Unauthorized use and/or duplication of this material without express and written permission from this blog’s author and/or owner is strictly prohibited. Excerpts and links may be used, provided that full and clear credit is given to Miles Rost and "Music and Fiction" with appropriate and specific direction to the original content.
%d bloggers like this: